Stand Up and Speak Up

Michael Alexander is a professional witness. He also coaches others to serve as witnesses, whether professionally or in their own personal cases. He has won over one and a half billion dollars in awards and settlements for the citizens of California and Minnesota. He has also served as the coach for the Monterey Highlands Middle School Mock Trial team. That team has gone to the quarter and semi-finals for 4 years in a row. And, several of his students have won individual awards. Michael is an award winning public speaker. He has been a member of Toastmasters for over 26 years and was the winner of the 2016 Spirit of Excellence Award. He has delivered presentations to the American Asian Professionals Association, the Minnesota State Legislature, city councils and several universities. Michael's success is the result of good old fashion hard work, not luck or good genetics. His grandfather and both of his parents were involved in community theatre. Michael also enjoys theatre and his son is following in the family hobby. But he wasn’t born with a silver star in his dressing room. He spent as much time backstage as on-stage and had to study both to get good at them. He studied storytelling with the Chicago Storytellers Association. As noted before, he put in his time studying with Toastmasters. And, of course, his Ph. D. from the University of Minnesota was not handed to him either. Michael also juggles, rides motorcycles, SCUBA dives, and eats fire. You can find Michael on line at www.AlexanderTalks.com 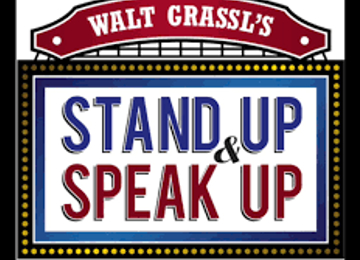 Ep. 330 Walt Interviews Christie Moore – Live On The Other Side Of Fear

Ep. 322 Walt Interviews Anthony Russo – The Art Of Doubling Down

Ep. 301 Walt Interviews Jan Tucker – Put Your Health In Your Own Hands

Ep. 297 Walt Interviews Cynthia Lou – Speak Up For Yourself

Ep. 283 Walt Interviews Melanie Fatuesi – Stand Out While Fitting In

Ep. 281 Walt Interviews Jill Prescott – Your Secrets Are Killing You

Ep. 274 Walt Interviews Ivanka From Tidy Moose – Is Clutter Holding You Back?

Ep. 252 Walt Interviews Giovanna Dottore – What Do You Want To Be When You Grow Up?

Ep. 247 Walt Grassl interviews Mark Given – The Trust Based Philosophy

Ep. 239 Walt Grassl interviews Aasiyah Ghazi – Use Your Voice To Make A Difference

Ep. 223 Walt interviews Susan Sheppard – What Difference Do You Make?

Ep. 197 Walt interviews Mary Cheyne – Tell Your Inner Critic to SHUT UP! And the Real You to SPEAK UP!

Ep. 124 Sandra Wilson on the major keys to success and happiness.

Ep. 123 Cathey Armillas on How to Rock a TED Talk

Ep. 58 Ino Enwek talks about speaking comedy and dishes dirt on the host.

Ep. 52 Carol McManus shares tips on how to be a better public speaker.